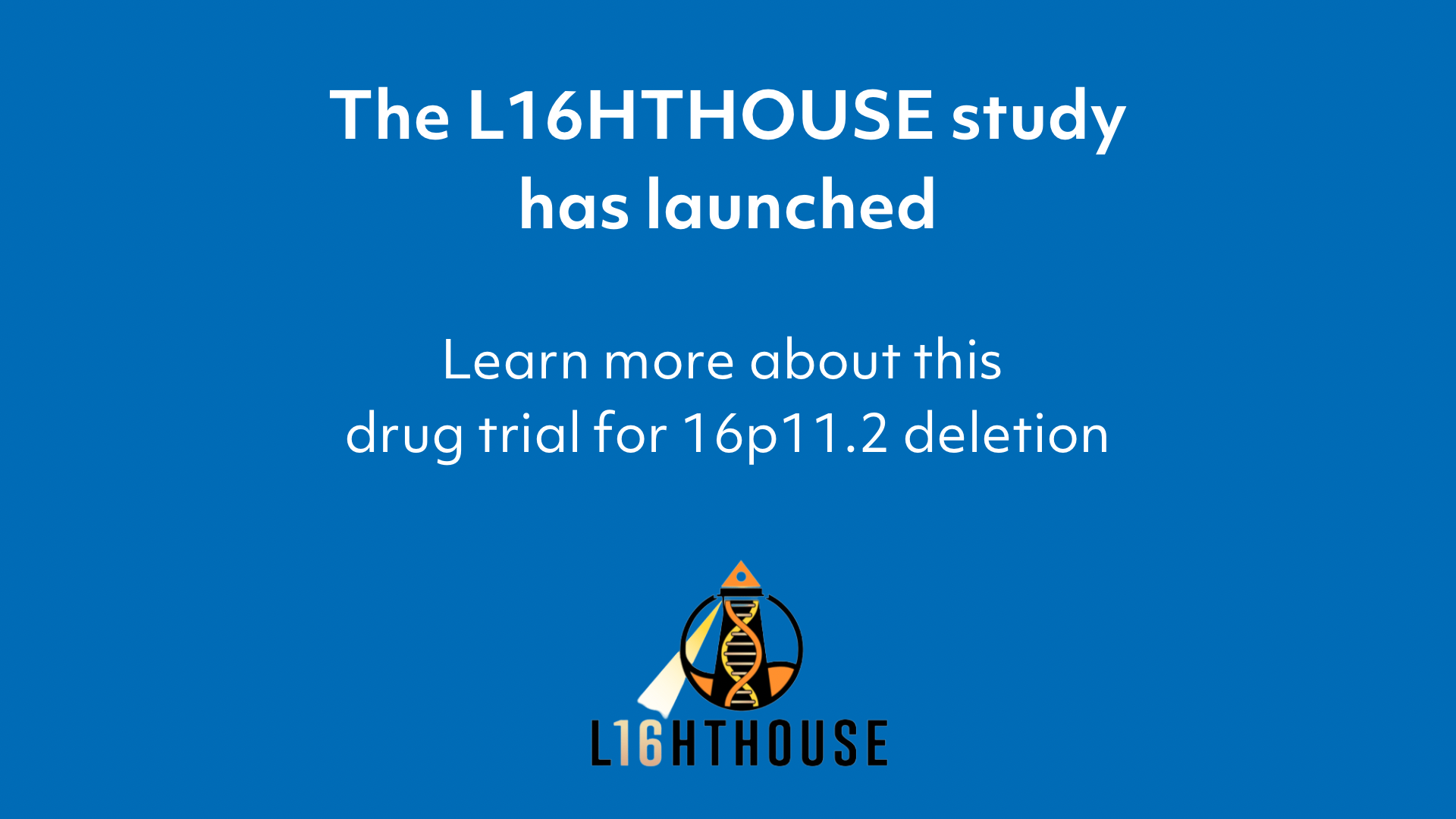 Clinical Trial of Arbaclofen for 16p11.2 Deletion has Launched

This message is to let you know the L16HTHOUSE study has officially launched.

Clinical Research Associates, LLC (CRA), an affiliate of the Simons Foundation, is pleased to announce the launch of a clinical trial of arbaclofen in individuals with 16p11.2 deletion.

Known as the “L16HTHOUSE study,” this Phase 2 clinical trial aims to examine the safety, tolerability and efficacy of arbaclofen in children with 16p11.2 BP4-BP5 deletion (ClinicalTrials.gov ID: NCT04271332). Eligible children (aged 5–17 years) will be randomized to receive either placebo or arbaclofen in a double-blind study design.

The L16HTHOUSE study includes up to 3 days of initial screening, 16 weeks of drug treatment, 21 days of drug withdrawal and up to 30 days of follow up. The study will include 4 visits (V1, V2, V3, V4). Enrollment in a subsequent open-label study may be available to participants who complete the study.

The study aims to enroll up to 60 participants (30 per treatment group). Arbaclofen will be given orally for 16 weeks, with study participants titrating up to the highest tolerated dose of the drug, with the maximum permissible dose dependent on age. After completion of the trial, participants may be eligible to continue enrollment in an open-label extension of the study, where all individuals would be given access to the drug.

Arbaclofen (also known as R-baclofen or STX209) is a GABAB receptor agonist. Baclofen, which is a racemic mixture of R-baclofen and S-baclofen, is approved by the U.S. Food and Drug Administration, European Medicines Agency and other regulatory authorities around the world to treat spasticity associated with multiple sclerosis, cerebral palsy and other conditions.

In Europe, baclofen is approved for use in children and adults. Although it is currently only approved for adults in the United States, physicians have been using it off-label for decades to treat young children with cerebral palsy. Thus, there is significant data on its safety and clinical profile in children.

The majority of the pharmacological action of baclofen is thought to reside in arbaclofen, with studies showing S-baclofen is between 10 to 100-fold less active than the R-enantiomer.

Numerous clinical trials over the past decade have tested the efficacy of arbaclofen in individuals with autism spectrum disorder (ASD) and fragile X syndrome (FXS). A small-scale randomized, controlled, Phase 2 trial in children and adults with FXS did not find a significant effect on the primary efficacy endpoint (i.e., a change in irritability) but showed promise in potentially improving social function1. An open-label study in children and adults with ASD also showed improvement on multiple different endpoints, including social function2.

Three subsequent larger-scale randomized, controlled trials (two of them in FXS and the other in ASD) did not show positive results on the primary endpoint (which was the Social Avoidance subset of the Aberrant Behavior Checklist, ABC, for the two FXS trials and the Social Withdrawal/Lethargy subscale of the ABC for the ASD trial)3,4. However, improvements were observed on several secondary endpoints, including the Clinical Global Impression of Severity scale (CGI-S), in the ASD trial3, and the Irritability subset of the ABC in the FXS trial for younger children.4

Two new clinical trials are currently underway to test the efficacy of arbaclofen in children and adolescents with ASD. The first of these is being conducted in Europe as part of the Autism Innovative Medicine Studies-2-Trials project (AIMS-2-Trials; ClinicalTrials.gov ID: NCT03682978). The second trial is being conducted in Canada (ClinicalTrials.gov ID: NCT03887676). The two trial protocols are essentially identical, and the primary outcome for both will be social function, as assessed by the Vineland Adaptive Behavior Scales, Third Edition (Vineland-3). Both trials are now concluding recruitment, and results will become available in the next months.

Copy number variants in the 16p11.2 locus are among the most frequently observed in ASD. Individuals with 16p11.2 deletion syndrome often have developmental delay, intellectual disability, and at least some traits of ASD, including challenges in communication and socialization. Of note, developmental differences in speech/language processing can be observed during speech testing5,6 as well as during functional brain imaging recordings7.

Findings from animal models of 16p11.2 deletion syndrome have provided some pre-clinical evidence that arbaclofen may be beneficial in treating some of the behavioral changes associated with the syndrome. Specifically, studies from multiple independent laboratories, using independently generated 16p11.2 deletion mouse models, have shown that chronic arbaclofen treatment can reverse cognitive and motor deficits and improve social interactions in the mutant mice8. Whether these findings translate to humans must await results from clinical trials in 16p11.2 deletion.

An online survey of the 16p11.2 deletion syndrome community was conducted by Simons Searchlight, with findings from that survey helping to inform the current clinical trial. Over 200 families participated in the survey, with more than 50 percent expressing interest in participating in a clinical trial. The most significant developmental concerns from the families’ perspectives included speech/language (60 percent), learning/memory/cognition issues (60 percent), and motor issues (30 percent). Thus, the endpoints chosen for the L16HTHOUSE study are not only clinically relevant but are also meaningful from the perspective of individuals with 16p11.2 deletion and their families.

“After a long delay due to the pandemic, the study team is excited to begin the L16HTHOUSE study,” says Paul Wang, deputy director of CRA. “The study design draws on lessons learned in previous trials as well as input from families about which therapeutic outcomes would be most beneficial to their children. We hope that this exploratory trial will provide insights on whether arbaclofen treatment is likely to be helpful for children with 16p11.2 deletion and their families.”

More information about the trial can be found on the L16HTHOUSE website or in the webinar below.