Defining the effect of 16p11.2 duplication on cognition, behavior, and medical comorbidities

In this article, the researchers explored which traits or features are most common among people with a 16p11.2 duplication. They also studied how mild or severe these traits can be and what influences their severity.

Taking part in the study were 1,006 people in Europe and the United States. Among the study participants, 270 had a 16p11.2 duplication. To help understand the role of family background in how features of the duplication are expressed, the duplication-carrying participants were compared with members of their families, including siblings of a similar age and their biological parents. This group consisted of 102 people from duplication families. Data from these families were also compared with previously reported data from 16p11.2 deletion families (390 people with the deletion and 244 control subjects from deletion families). Many of these participants were enrolled through Simons Searchlight.

To examine how 16p11.2 duplications and deletions affect a person, researchers compared: 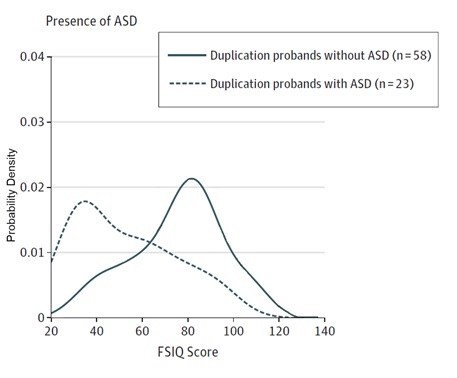 This graph shows the range of full scale IQs for study participants who have the 16p11.2 duplication.

Physical Characteristics: Individuals with the 16p11.2 deletion were much more likely to be overweight in contrast to those with the 16p11.2 duplication who were more likely to be underweight when compared to the BMI scores of family members without the gene changes.  Additionally, head circumference (which is correlated with brain volume) was decreased in those with the duplication (22.3% of duplication subjects) and was positively associated with nonverbal IQ. This relative decrease in head circumference begins during the first two years of life. Major medical malformations were seen in 16.7% of the duplication group and 21.1% of the deletion group. The most common malformations were scoliosis and genital and cardiac malformations, appearing in both duplication and deletion groups.